Magazines
Magazine advice pages can work in similar ways to newspapers with one or two pages within the publication given over to reader problems. As with newspaper advice columns, people write in for reassurance, information, signposting or referrals to other services, a second opinion or ideas for self care. Some may not require a reply at all but simply want to vent about or confess to something that is bothering them. The process of writing about your life can be cathartic and give you insights to solve your own problems. 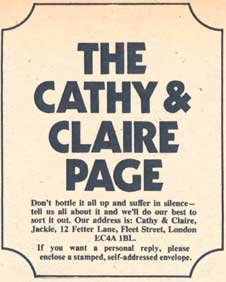 Formats include
– multiple short letters published with equally brief replies (problems and responses of about 100-200 words each)
– two or three longer letters per page with answers of varying length
– one question that may or may not be a lengthy letter but will receive a detailed reply (of between 500-800 words)
– a discussion between a reader (or a celebrity) and the resident advice columnist, where a particular issue or problem is worked through
– photo stories where a problem is shown using models or actors, which may or may not have concluding advice from an agony aunt/uncle
– links to self help books, websites, telephone advice lines may feature alongside replies

Alongside this the delivery of advice may vary, and can include:

ven by resident agony aunt or uncle (some magazines have long standing advice columnists, others have a high turnover of advice giving staff)

− guest experts answering particular problems (may or may not be celebrities)

− one or more experts on a panel providing answers to problems

As with newspapers, questions remain about the effectiveness of advice giving in print media where short answers may not give enough information for someone to help themselves, or where people in need of help write in but do not get a response from an agony aunt (see FAQs for more on the ethical issues of giving a personalised reply to those in crisis).

Gender differences can often be seen across magazines with those aimed at women being more likely to feature a problem page and those aimed at men not always having a page. Where pages exist for young women the focus tends to be more on sex and relationships, while older women’s magazines may include additional advice on finances, work, parenting, ageing and health. Men’s magazines may focus more on comedy/joke messaging with sex advice particularly being presented as something you’re already good at but can improve on. Or take a stiff upper lip approach to masculinity where (in the words of one GQ editor Michael Van Meulen) ‘real men don’t have problems’. Questions on sexuality and psychosexual problems may be less likely to be covered in magazines aimed at straight men. And some men and women’s glossy magazines opt to have no problem page if it contradicts their overall aspirational branding of success.

Further reading on magazine advice columns and archives for analyzing them can be found here.